Given a perfect steer by driver Dave Magee, the daughter of Southwind Breeze-Jen was hustled to the front after landing in fourth through an opening quarter in 29.4.

“I knew we had to gain some early position since we were leaving from the eight hole,” explained Magee. “Once they started to slow down just a little bit on the front end I asked her to go and she moved up to the front very easily for me.”

Rolling through middle splits of 59.3 and 1:28.4, the Dirk Simpson trainee began to put daylight between herself and her struggling rivals as the field neared the top of the stretch.

On cruise control the rest of the way, Bailey’s Wish effortlessly trotted under the wire with her third win in her last four starts and her fourth win in 11 lifetime starts. Fox Valley Skylar (Dale Hiteman) rallied up the inside to finish second while Bands Pippa (Casey Leonard) was third.

“She was doing that all on her own,” said the Hall of Famer. “I don’t like to pressure her if I don’t have to. She just trotted right away from them and glided home with no urging from me whatsoever.” 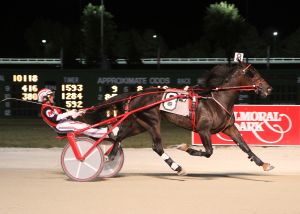