Crete, IL — State-bred trotting fillies were the focus of attention on Sunday (May 25) at Balmoral Park, as a field of 10 3-year-olds went toe-to-toe in the $47,600 Violet Stake as part of a big Memorial Day weekend of festivities at the Crete oval.

Proving that she will once again be a force to be reckoned with in this division, James Bafia and Eugene White’s Bailey’s Wish reported home with a hard fought neck decision in a career best 1:57.3 for driver Dave Magee.

After leaving quickly from post five Magee elected to let the hard charging Macie Rae (Ryan Anderson) and Say No Mo (John De Long) battle it out through splits of :29, :57.2 and 1:27.1.

After carving out a perfect pocket sitting journey while those two fillies battled tooth and nail, Magee showed his Hall of Fame skills as he slipped to the outside of Macie Rae as the field straightened for the money. Gradually wearing down the pacesetter, the Dirk Simpson trained miss gamely moved to the front with a sixteenth of a mile to go and then held off a late charge from longshot Rollette (Dean Magee) for her sixth lifetime victory. Macie Rae held on for third.

After starting this season with uncharacteristic breaks in two of her first three starts, the daughter of Southwind Breeze-Jen was as smooth as could be on Sunday night as she pushed her lifetime numbers to 6-4-2 in 18 starts with earnings of just over $129,000. 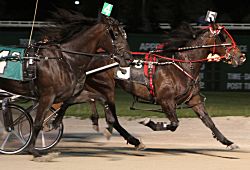