Melrose Park, IL — Taking advantage of a mid-race speed duel, driver John De Long slid 24-1 longshot Silver Devil to the outside of horses on the backstretch the final time, then rallied sharply in the lane to post a half-length upset in Friday’s (May 30) $34,380 Cardinal Stake for older state-bred pacers at Maywood Park. The final time was 1:53.3.

Using post position two to perfection, De Long positioned the handsome roan son of Duneside Perch along the pylons while Elkhorn Damien (Todd Warren) and Crankin’ It Up (Kyle Wilfong) battled through a :27.3 opening quarter. After letting the field settle into position through that opening split, driver Casey Leonard sent 4-5 favorite Fort Silky on his way from fifth as the field headed into the stretch the first time, prompting some strong urging from Warren with Elkhorn Damien. With these two quickly engaged in a speed duel the dominant Fort Silky made a very uncharacteristic break as the field moved to the half-mile mark in :56.1.

Quickly righting the ship with Fort Silky, the top two continued to battle tooth and nail as the field raced by the three-quarter-mile mark in 1:24.3. By this point De Long had slipped to the outside with Silver Devil and had the 4-year-old gelding powering up three wide around the top pair as the field moved into the final turn. Sweeping around the tiring leaders as the field turned for home, the Nick Giberson trainee paced home in :28.3 for his first win of the season, holding off a big late move from another longshot, Fancy Creek Elusiv (Ryan Anderson), who made a huge four-wide surge around the last bend. Elkhorn Damien held on for third. 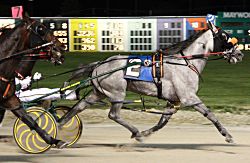