Fresh off a win in the Dudley Hanover Stake down in DuQuoin Dinky Dune continued his “dream season” as he rolled to a one-length victory in a career best of 1:51.4 giving driver Pat Curtin and trainer Dane May their first Super Night championships in the $112,000 Pete Langley Memorial for 3 YO colt and gelding pacers.

Working out a second-over trip while Earndawg (Todd Warren) carved out splits of 28.0, 56.1 & 1:24.0 Curtin had the son of Duneside Perch—Dream Hand in perfect striking position as the field turned for home.

“All night I had my mind set on wanting to get into the two-hole with this horse,” said a very excited Curtin. “Then right before we went out there Dane said to me Pat please just give him a trip and try to be second-over with him and that’s what happened. Dane was definitely right on with that one!”

Gradually reeling in a tiring Earndawg, Dinky Dune was well in hand to Curtin as he charged home in 27.2 to record his sixth win 14 starts this season. Earndawg turned in a game effort from the 10-hole to finish second while longshot Mighty Hot Shot (Ridge Warren) was third.

The richest event of the night was saved for last as a field of nine closed out the night in the $187,000 Orange & Blue Stake. Taking advantage of some brisk early fractions, Kay Willis’s Dan D Dune came flying through the stretch to win by a half-length in a career best of 1:53.3 for driver Mike Oosting.

Pacing along third over while Royale Rose (Matt Krueger) faced constant pressure through splits of 26.4, 56.2 & 1:25.1 Oosting moved the Nelson Willis trained son of Duneside Perch—Witch Hanover three deep as the field hit the head of the stretch.

“I was a little concerned with how far back we were but I knew those horses up front were getting roughed up pretty good,” said Oosting. “This horse has always finished up a mile well though and I knew if they faltered at all up there we were going to get there in time.”

Picking up one rival after another the Governor’s Cup winner zoomed right on by with a well measured move from Oosting for his fifth win of his career. Wondrous Sport (Casey Leonard) was a tough luck second while BS Tyrrific (Kyle Wilfong) was third. 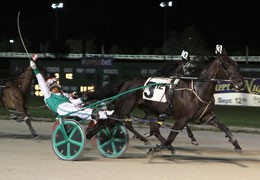