A pair of University of Illinois-owned fillies that were sold in the 2016 UI consignment to the Illini Classic Sale proved to be bargains for their new owners in 2017.

Rollin Coal P, 2, 1:56.1 ($90,729), the incredibly consistent Sagebrush daughter out of the University of Illinois-owned broodmare Emission Control P, 2, 1:54.1 ($19,597) raced near the top of her class all season long after being purchased by Hosea Williams for just $3,600. Rollin Coal started her career with 3 straight wins at Hawthorne Raceway in the first leg of the Incredible Tillie Stakes and the elimination and final of the Violet Stakes. After one sub-par effort in a two year old filly overnight pace when she finished 4th, Rollin Coal never again finished off-the-board in the remainder of her stakes races. In 3 more legs of the Incredible Tillie Series, Rollin Coal placed third once and second twice, then was second in the $175,000 Incredible Tillie Final to eventual 2 YO filly Pacer of the Year Fox Valley Jazzy P, 2, 1:54.3 ($130,265). Rollin Coal finished the 2017 season with 2 straight wins in a pair of Fall Review Stakes at Springfield. Rollin Coal was the second-richest 2017 Illinois 2 Year Old Pacing Filly, and was also the 3rd fastest race-timed filly when her furious rally from 5 lengths back at the ¾ pole in the Illinois State Fair Championship ended with her finishing a close 3rd , beaten just 1 ¾ lengths in 1:53.3. Hosea Williams has good reason to believe that Rollin Coal can race at the top of her class in the 2018 Illinois Sires Stakes.

Trotting Grace, T, 2, 1:59 ($64,782) was purchased by H.W. Wright from the UI consignment to the Illini Classic Sale for just $5,700, and she was also near the top her division all season long. She had 5 wins, 2 seconds and 1 third out of 10 starts – all in stakes races. Her only off-the-board finishes happed when she finished 5th in the Violet Stakes final after suffering an entrapped epiglottis, and in the Shawnee Stakes at DuQuoin, being placed 5th in a heartbreaking loss due to interference with another horse after finishing first by 7 lengths in a sparkling 1:56.3. Trotting Grace showed extreme 2 year old trotting speed in the State Fair Final as well, trotting in 1:57 after a very tough journey left her in 3rd place. Mr. Wright has plans to race Trotting Grace against the top Illinois stakes fillies in 2018, as well as top regional foes in surrounding states this upcoming year. 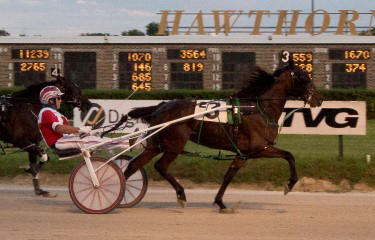