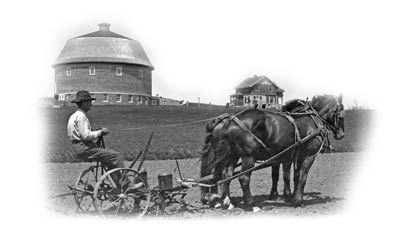 In 1897, soon after Davenport had been appointed dean of the College of Agriculture, he began a breeding program for Morgan horses. One of the first Animal Husbandry divisions to be established under Herbert Mumford was the Horse Division in 1903. This situation was apparently unusual, as Dean Davenport stated in a Round Barns at the University of Illinois1904 Daily Illiniarticle that “This is also the only University in the world that employs a horse expert…Strangely, the horse is given but very little attention at other institutions. The University horses are purebred Morgans and several of them are kept at the barns on the south farm [south campus]”.

The wooden Mare Barn was built in 1911. The breeding of draft horses was the main interest of the division, with an emphasis on Percherons . Included in the University herd were 29 purebred Percherons, including five mares imported from France, five American-bred mares, ten two-year-old fillies, seven colts, and two imported stallions. Care was taken to choose animals of both good breeding stock and good show records. The division also had nine registered, five-gaited, saddle-bred light horse mares and four hackney ponies. For farm work there were ten to fifteen geldings and mules. 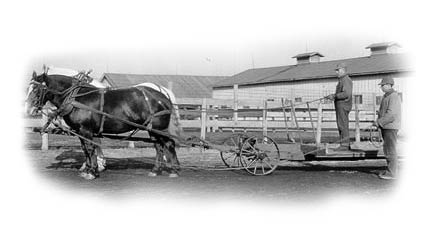 The Animal Husbandry Department was using purebred draft horses, Percherons , for their farm work. A herd was developed in the early 1920s that included stallions, brood mares, and young stock. In 1923, J.L. Edmonds traveled to France to purchase a Percheron stallion to improve the draft horse breeding program. Named ” Urometre,” the imported stallion headed a program of about forty Percheron horses and was a very succesDraft Horses Workingsful breeder of prize winning foals. A new horse barn (“Tile” Barn) was built in 1924 by King & Petry Company for $29,655 from designs of University Architect, James White. This barn was a tie-stall barn that housed the Percherons. A second French Percheron stallion was purchased in 1928.

Apparently, the University of Illinois was one of the last large farm operations to switch to tractors, continuing to use draft horses for farm work into the early 1950s. The last working purebred Percheron working draft team, Illini Jolly and Illini Nettie , were sold at auction in October, 1953; however, a lighter team was kept for minor chore work at the beef barns. After World War II, the University proposed starting a program for the breeding, feeding, and care of light horses. The quarter horse herd was established in 1948 with seven mares and two stallions. Eventually, only mares and sires from the King Ranch (Texas) were used in the program.

In an economy move, the horse program was transferred to the University’s Dixon Springs Experiment Station in 1960. Two years later (1962), the entire herd was sold at auction and the horse program was disbanded. 67 This action was taken due to rising operational costs and a need by the College of Agriculture to concentrate its efforts on livestock of more economic importance to Illinois agriculture. In addition, the University’s herd was too small for teaching or research purposes. Following the sale, the South Farm horse facilities were either vacant, used by other divisions for storage, or by other University departments. Beef cattle were housed in the Mare Barn and the Tile Barn’s west wing was remodeled in 1961-1963 with a K-40 radioactive counter installed; the kinesiology program of the School of Arts and Sciences used the area extensively at least King Hand – 1952through the 1980s. 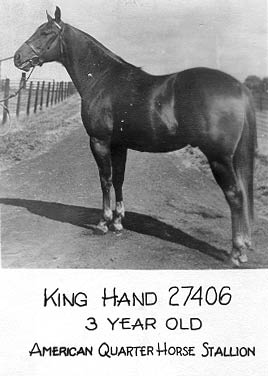 Popular demand in the early 1970s brought back the horse program. Increasing enrollment in the single equine course and increased interest in the livestock judging team for a horse component, led to repeated requests for horses to return to the South Farm. Gradually the program was expanded and numerous light horses were donated to the University in the 1970s. Most of these were Quarter Horses of Skipper W breeding.

In the mid-nineteen-nineties the breeding facility was modernized with a new facility designed and installed in the rear of the Tile Barn. This installation has a modern laboratory, stallion collection area, and four mare examination areas. The new facility allowed for breeding short courses as well as providing better research and educational programs.

Carl Becker, University of Illinois alumnus and owner of Fair Meadow Farm in Altamont, Illinois significantly transformed the teaching and research opportunities as well as the financial well-being of the University horse farm. Through long-term lease agreements, the UI horse farm committed to stand Mr. Becker’s stallions for public breeding. Animal Sciences and Veterinary students at UI have been given an unprecedented opportunity to learn first hand about the workings of a successful commercial horse breeding operation, through working with Mr. Becker’s outstanding breeding stock which has included the stallions Armbro Mackintosh, Park Place, Kingston, Cheyenne Spur, Rosemont Principal, Western Hero, Soutwind Breeze and Duneside Perch.

The Standardbred breeding program for the University horse farm received a major boost in 1998 with the arrival of Armbro Mackintosh, 1991, p, 3, 1:51.1 ($471,628) (Jate Lobell – Apple Country – Strike Out) . Mack had already produced Woodsie and Buster (P, 3 1:52.1M, $479,919) who was racing in New Jersey and having a phenomenal year as a three year old in 1998. In 1999, Mack was named the Illinois Pacing Stallion of the Year. Mack proved to be a great asset for the horse farm as was a consistent producer of fast racehorses, especially his daughters. Mack’s top racing mare Free, p, 4,1:49.2 ($531,259) was the co-fastest race-timed mare in history when she dropped a heartbreaking photo finish to great World Champion mare My Little Dragon p, 4, 1:48.1 (2,059,986) in that mare’s world record mile. This top stallion was humanely euthanized during the summer of 2008 at 17 years of age due to conplications from a longstanding case of chronic founder dating from his 3 Year Old racing season.

In 2003, Park Place, 1994, P, 3, 1:51.0M ($765,552) (Artsplace – Deneen’s Delight – Most Happy Fella) was purchased by Carl Becker and Peter Spaeth and stood at the horse farm for the first time in 2003 after servicing small books of mares in Ohio and Northwestern Illinois. During his racing career, Park Place established himself as one of the fastest pacers in history, being timed in 24.2 seconds for a quarter mile and 1:48.4 for a mile. The University horse farm produced numerous winners by Park Place, who proved to be an outstanding success at stud. The top Park Place foal raised at UI was the 2007 Illinois Season’s Champion, Little Pedro p, 2, 1:50.4 ($92,544) and Park Place’s best race horse ever was the great Ohio-bred, Buckeye One p, 5, 1:48.1S ($915,530). Park Place died prematurely after colicking in the spring of 2008.

Beginning with the 2007 breeding season, the UI Horse Farm acquired the services of the pacing stallion Western Hero p, 2, 1:53.2; 5, 1:51.3 ($182.309). Western Hero is a full brother to the outstanding Pennsylvania sire Western Ideal p, 5, 1:48 ($1,455,422) who has become a famous sire of sires, as his sons Rocknroll Hanover and American Ideal have proved to be sensational stallions. Western Hero was a successful sire in Maryland and Indiana before coming to Illinois and has himself sired 24 winners of over $100,000 from limited opportunity.

In addition to having a thriving Standardbred breeding program, the UI horse farm has been home to research that has contributed to the knowledge base in equine nutrition, physiology, reproduction and parasitology. UI horses were used in the research leading to the approval of the widely used de-worming compound, Interactive, and in the establishment of blood gas testing policies used by racing commissions around the world. Current research is investigating the usefulness of various dietary fats in horse diets, investigating ways to reduce osteochondrosis in growing horses, and determining the effects of various methods of feed processing on digestibility, growth and feed efficiency of growing horses.