Continuing to show that she is one of the top distaffers on the Chicagoland circuit, Frank Baldachino and Earl J. Smith’s Rev Me Up toyed with nine other filly and mare pacers as she rolled to a 1 ¾ length victory in Sunday’s $14,500 Fox Valley Mystery Stake at Balmoral Park.

Confidently handled by driver Eric Carlson, the four-year-old daughter of Park Place floated away in fourth as Joinusforsomefun (Kyle Wilfong) led the field through an opening quarter in 27.4.

Electing to put his mare in control of the proceedings, Carlson quickly moved to the outside as the field raced down the backstretch and the Kathy Millman trainee swept to the top as the field raced by the half-mile mark in 57.0.

Getting a 29.1 breather as most of the field sat tight around the far turn, Rev Me Up was still fit and fresh as she sped by the three-quarter-mile station in 1:26.1.

The issue was never in doubt from that point on as the classy mare sped home in 27.0 to secure the victory while under very little urging from her pilot. Joinusforsomefun followed the winner’s every move for the final three-quarters of a mile to finish in the bridesmaid role, while Reilly’s Daughter (Todd Warren) overcame some early traffic problems to rally from far back to finish a nice third.

The win was the sixth in 33 starts for this tough-as-nails mare who now boasts $374,209 in career earnings. Rev Me Up has hit the board in 41 of her last 61 starts for her proud connections. 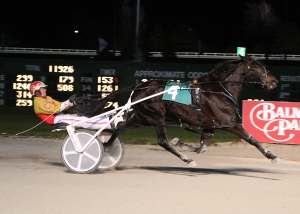