Sleazy Does It now boasts a career record of 6-6-3 in 19 starts with earnings of nearly $165,000 after posting a 1 ¾ length victory in 1:54.3 with Marcus Miller at the controls. After Miller was able to avoid traffic trouble due to a break by Fox Valley Hermia (Ronnie Gillespie), the daughter of Sagebrush-Da Sleazy One began to circle horses, quickly swallowing up Party Hangover (John De Long) who had been stuck first over for quite some time. With clear sailing the Nelson Willis-trained miss set sail for home, rewarding a legion of backers who had hammered her down to even money. Longshot Melodie Hotspur (Mike Oosting), who was a surprise winner in last week’s elimination action, rallied late to be the bridesmaid while Party Hangover wound up third.

Stevanna Turner and John Fletcher’s NJ’s Big Deal continued to lead the division through the first half of the season as he turned in a huge effort to post a thrilling neck decision in 1:53.0. Despite being late to the gate and spotting the field a couple of lengths at the start, NJ’s Big Deal was in front as the field reached the opening station in 28.0. “I was so relieved that we were still able to get to the front because I kind of mistimed getting to the gate,” said Gillespie. “Then when the five horse (Uncle Smoothie) made a break it really made it a lot easier for us to get there without having to use him too hard.” In control of the proceedings, NJ’s Big Deal continued to roll along with a 1 ½ length lead as he cruised by the half-mile mark in 57.1.

With that soft second quarter under his belt Gillespie and NJ’s Big Deal continued to show the way to the three-quarter-mile mark, with a hard charging Crime Of Passion (Marcus Miller) leading a developing outer flow as the sophomores raced by the three-quarter-mile mark in 1:25.2. Despite Crime Of Passion getting almost three-quarters of a length in front of NJ’s Big Deal on the final turn Gillespie was confident that his colt still had more left and stepped on the gas again, regaining the lead as the field moved into the stretch.

A thrilling stretch duel ensued with NJ’s Big Deal clinging to a short lead while Crime Of Passion tried to re-rally just outside of him. After following the cover of Crime Of Passion, Al’s Hammered (Robert Smolin) was also making up ground on the far outside of horses after tipping three wide at the top of the stretch. A locked and loaded Fox Valley Mahalo (Todd Warren) was also right there just waiting for a shot to get into the passing lane. With the four pacers spread out across the track NJ’s Big Deal dug in gamely, holding off Crime Of Passion for his fifth win in 12 starts this season. Crime Of Passion was forced to settle for second while Fox Valley Mahalo was third. Al’s Hammered was fourth, just a neck behind as 1 ¼ lengths separated the top five finishers in the race.

After the thrilling victory a joyous Gillespie relived the thrill of victory and the agony of defeat. “Tonight we came out on top and this is the greatest feeling in the world,” he said. “Last week wasn’t so good when Fox Valley Hermia made a break in the final turn while leading the Filly Maywood Pace. I guess that’s the way this game goes.” 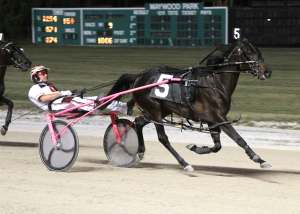